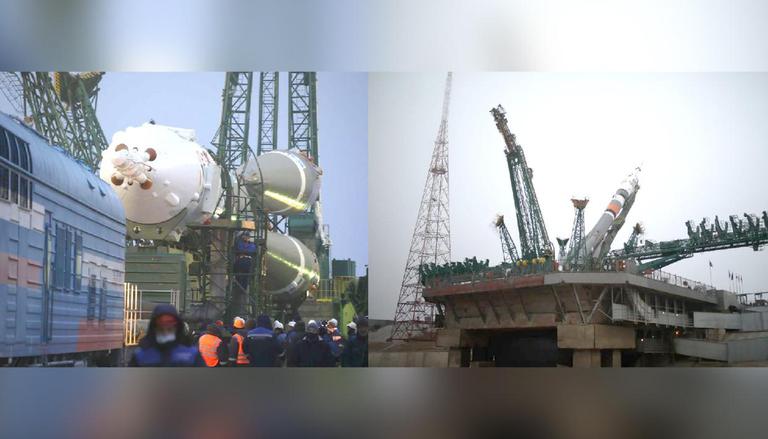 The Soyuz-2.1A rocket that will inject the Soyuz MS-20 transport spacecraft into orbit was installed on Sunday on the launch pad of the Baikonur Cosmodrome in Kazakhstan. The space rocket was delivered to the Cosmodrome’s Site 31 launch complex in a horizontal position on the transport and installation unit, Russian space agency Roscosmos informed via a Twitter post. After its delivery, the Roscosmos specialists installed the rocket on its launch pad in a vertical position.

The launch of the Soyuz MS-20 space transport is scheduled for Wednesday at 7:38 a.m. GMT and is expected to dock with the International Space Station (ISS) at 13:41 GMT the same day. Sputnik reported. The main crew of the Soyuz MS-20 includes Roscosmos cosmonaut Alexander Misurkin, Japanese billionaire businessman Yusaku Maezawa and film producer Yozo Hirano. Additionally, the backup crew will include Roscosmos cosmonaut Alexander Skvortsov and space flight participant Shun Ogiso. The flight participants will stay at the ISS for 12 days.

It’s relevant to mention that 49-year-old business mogul Maezawa will be the first space tourist to travel to the ISS with Roscosmos since Cirque du Soleil co-founder Guy Laliberte in 2009, Strait weather reported. During their stay, Hirono will shoot videos of Maezawa for Maezawa’s YouTube channel. The space flight comes about two months after the Russian film crew, including actor Yulia Pereslid and director Klim Shipenko, returned to Earth after spending 12 days aboard the ISS.

Earlier Thursday (December 2), crew members of the Soyuz MS-20 bound for the ISS reached the Baikonur Cosmodrome in Kazakhstan for a control inspection of the manned spacecraft, Roscosmos informed in a statement posted on Twitter.

“After the introductory briefing, cosmonauts and spaceflight participants familiarized themselves with the composition, placement of cargo and equipment in the descent vehicle and in the utility compartment,” the statement read.

At the end of the inspection, the crews reported that there were no comments on the results of the â€œfittingâ€ check, and thanked all the specialists for their work.

Main and reserve crews also visited the Baikonur Cosmodrome Museum, famous for its unique collection of exhibits to carry on the pre-launch tradition. Cosmonaut Misurkin and spaceflight participants Maezawa and Hirano then signed autographs at the stand with memorable inscriptions and wishes in the guestbook.