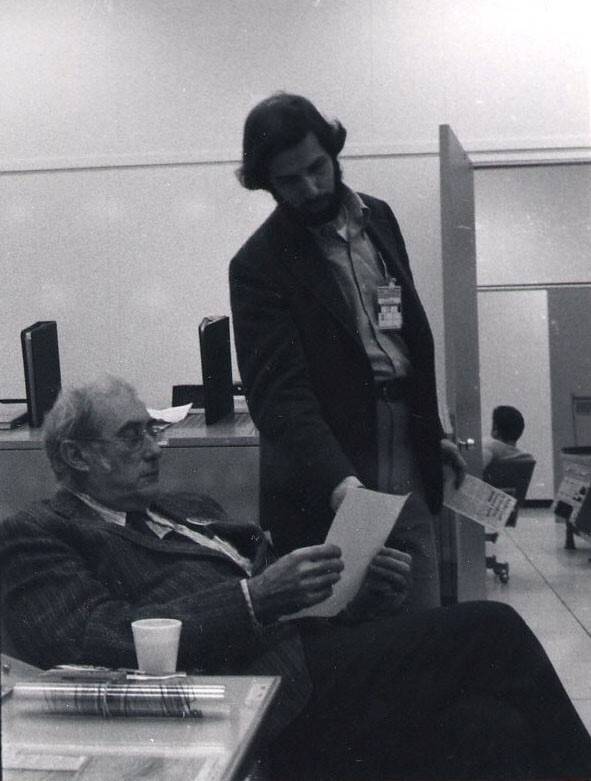 Astronomer Paul Feldman, a world authority on comets and a pioneer in the field of ultraviolet spectroscopy of comets, died at home on January 26, 2022. He was 82 years old.

In addition to his pioneering contributions to cometary science, Feldman—professor emeritus in the Department of Physics and Astronomy and a professor at the Academy—made similar contributions to the fields of planetary and satellite atmospheres and astronomical instrumentation. He was principal investigator of a NASA-supported sounding rocket program and was responsible for more than 50 sounding rocket launches to study Earth’s upper atmosphere, auroras and airglow, atmospheres of comets and planets, spectra of hot stars and cosmic background radiation. He is largely responsible for Johns Hopkins’ reputation as a leader in solar system ultraviolet astrophysics and spectroscopy.

“Paul was a major presence in the Department for many decades and served with great efficiency and distinction as Department Manager during a critical period of growth and revitalization of the Department. He was truly one of a kind, and his leadership, wit and wisdom will be greatly missed,” said Timothy Heckman, professor and department chair.

Legend: Feldman, right, with Hopkins physicist Bill Fastie in their data reception area in Houston during the Apollo 17 mission in December 1972. Photo courtesy of Academy professor Richard Conn Henry, who was co -investigator of Fastie’s experience with Feldman.

Feldman’s program also developed the UVX experiment which flew on the Space Shuttle Columbia in January 1986. He served as a principal investigator for a program of comet studies, including Comet Halley in 1985-1986, using the International Ultraviolet Explorer satellite observatory. He was a co-investigator on the team that developed the Hopkins Ultraviolet Telescope for FUV astronomy as part of the Astro payload that flew on the Space Shuttle in December 1990 and again in March 1995, and was an observer general with the Hubble Space Telescope and served on the Space Telescope Users Committee from 1992 to 1995. He was also a member of the FUSE Science Team and co-investigator on the HST Advanced Camera for Surveys, and a member of science teams from NASA for the Rosetta and LRO ultraviolet spectrometers. team and the Europa Clipper UVS team.

“Paul was on the ground floor of developing the instruments and analytical techniques used to understand the chemical and dynamic makeup of comets, planets and moons in our solar system, which he eagerly shared with all who entered. his office,” Stephan McCandliss said. , a professor-researcher in the department whom Feldman hired in 1988 to work on the sounding rocket program. “His expertise and enthusiasm for spectroscopy made him a key developer and knowledgeable user on dozens of U.S. and international space astronomy missions, where he could always be counted on for his wise mentorship, witty words ironic and his preparation for fine dining. But perhaps most importantly, working for him was easy and always interesting.”

Feldman’s work was notable for its broad breadth and depth, said Harold (Hal) Weaver, a research professor in the department, senior professional staff at Hopkins Applied Physics Laboratory and Feldman alumnus. Feldman first ventured into the realm of cometary science with an ultraviolet sounding rocket experiment to observe comet Kohoutek in 1974, and took inventory of the abundances of hydrogen, oxygen, and carbon in the comet coma. For the rest of his career he was what Weaver describes as a “planetary archaeologist”, investigating the origin and evolution of our solar system.

In 1976, during a sounding rocket experiment to observe Comet West, Feldman made the first detection of the carbon monoxide molecule in a comet, recording what is still one of the best examples of cometary ultraviolet spectra. never got it, Weaver said. The amount of CO in cometary nuclei is essential for understanding their formation, conditions and evolutionary history. Since then, Feldman has remained at the forefront of attempts to study cometary CO, using sounding rockets, the International Ultraviolet Explorer satellite observatory, the Hubble Space Telescope, FUSE, and the Rosetta spacecraft.

In the field of planetary and satellite atmospheres, Feldman was an early leader in the remote sensing of Earth’s upper atmosphere by rocket-borne spectrometers, and his fundamental research on the radiation of Earth’s upper atmosphere eventually led to the emergence of the field known as “space weather,” said Darrell Strobel, a professor at the Academy and a research professor in the departments of Earth and Planetary Sciences and Physics and Astronomy, and one of the close collaborators of Feldman for 50 years.

Feldman also spent time researching Galilean satellites, being part of the team that discovered molecular oxygen atmospheres on Europa and Ganymede, polar auroras on Ganymede, and equatorial auroras on Io. More recently, he was part of the team that discovered fountains of carbonated water emanating from the surface of Europa, suggesting that there may be life under this moon’s thick shell of ice. His work with the Hopkins Ultraviolet Telescope provided spectacular spectra of Jupiter’s daylight that are the definitive data for unraveling the fundamental processes that create Jupiter’s ultraviolet luminosity, and he led that telescope’s investigations of Mars and Venus. , with equally significant results.

Warren H. Moos, professor emeritus of the department, has worked with Feldman on numerous projects both formal and informal. “I’ve come to really appreciate him as a colleague for his fantastic scientific insight and his ability to sum things up and say them right,” Moos said.

At the same time, he has supervised dozens of doctoral dissertations, significantly shaping the next generation of researchers. “It takes that kind of commitment from professors like Paul for scientific research to flourish,” Weaver said.

Former student Kevin France, now an associate professor in the Department of Astrophysical and Planetary Sciences at the University of Colorado, says the fundamentals he learned from Feldman and McCandliss allowed him to follow any research questions that arise. pose in his current role. “I believe the most important lesson I learned from Paul is that if you take the time to learn the physics underlying astronomical spectra, you can essentially teach yourself to make a contribution to any field. astronomical,” France said.

France described a legendary milestone for Feldman students. Known as “the Talk” or “the Ride”, this usually happened while traveling to White Sands Missile Range to launch the student’s thesis rocket. When the student least expected it, Feldman suggested they return to Las Cruces together. “Forty-five minutes, no NPR, just you and Paul. Then Paul would review your graduate career up to this point, and politely but firmly tell you that it was soon time to wrap up your thesis and move on. to something else”, France mentioned. “I ended up completing Hopkins graduate program in 5.25 years because I knew after the Talk it was time to leave the nest!”

As a child, Brooklyn-born Feldman made hand-drawn star maps and was a member of the junior astronomy club at the Hayden Planetarium in New York. He graduated from Brooklyn Technical High School and earned a bachelor’s and doctorate (1964), both in physics, from Columbia University. He was an instructor at Columbia (1964-1965) and an EO Hulburt Fellow at the Naval Research Laboratory (1965-1967), and arrived at Hopkins in 1967, where he chaired the department from 1996 to 2002. He retired in 2010.

Feldman was a Fellow of the Alfred P. Sloan Foundation (1969-1974) and Fellow of the American Physical Society, and was a Fellow of the American Astronomical Society, American Geophysical Union, and International Astronomical Union. He was deputy editor of Journal of Geophysical Research: Space Physicsand was a member of the editorial board of Icarus and the Committee on Planetary and Lunar Exploration of the Council of Space Sciences of the National Academy of Sciences from 1985 to 1988.

Many years ago the department had a chamber music group where Feldman was the cellist. “I remember very well that Paul liked Beethoven’s Archduke Trio and didn’t like Mozart’s piano quartets. We all enjoyed Schumann’s Piano Quintet. Those were the good old days,” recalls Chia-Ling Chien, a professor in the department and one of two pianists in the group.

In addition to his scientific prowess and lasting impact on his fields, Feldman is remembered as a dedicated colleague and mentor whose enthusiasm and humor forged many friendships. Weaver recalled an anecdote illustrating this spirit: “During one of his trips from Denver to BWI, the flight attendant asked Paul if he had enjoyed his meal, to which he replied, ‘It is the second worst meal I have ever eaten in my life. . The worst was on the flight from Baltimore.'”

“The people who supported Paul when he was president weren’t just his staff; we became his friends,” said Pam Carmen, the department’s senior administrative coordinator. “He was the kind of guy who brought you into his family. Around this time we also became friends with his wife, Joan, we knew all about his daughters, Marian and Kathy, and got to experience the thrill that he felt at the birth of his grandchildren, which we all looked forward to. And I was honored to see Paul and Joan at my 50th birthday. It was a very busy Friday and I said goodbye to him at 5pm only to see them at my house when I got home. It was a surprise I’m shocked he was able to keep. This close relationship continues to this day. I felt so blessed to to be able to visit Paul and Joan shortly before he passed. I have a photo of that visit and I will always remember that day with a smile on my face.”