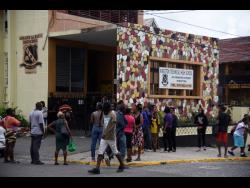 Over the past few weeks, the media and the general public have been rightly in turmoil over the increase in school violence occurring in different parts of the country. The case of a teenage girl stabbed to death by a classmate during school time has sent shock waves inside and outside Jamaica.

The tragic and disturbing incident was quickly followed by a newspaper report reporting gang-affiliated high school students carrying guns, knives and ice picks while on the grounds of the school, supposedly arming themselves to fight against their rivals.

As the problem escalates, everyone seems to be searching for answers while ignoring some obvious solutions.

Violence does not fall from the sky. Experts agree that it is a developmental process that begins in early childhood. Teenagers with violent behavior have mostly been victims of violence themselves, often from an early age.

Children born and raised in unstable communities, whether urban or rural, are accustomed to violence long before puberty, even when their own homes may be free of violence.

In urban settings, the cramped physical configuration of dwellings, not to mention the clutter of life in the courtyard of buildings, exposes children to a plethora of daily quarrels and arguments, many of which result in fights, beatings, knife and sometimes death.

TENDENCY TO BE HARSH

Children born and raised in inner cities have to be tough, and that includes girls. It’s survival of the fittest and they learn the art quickly. Disputes are settled by brute force, not only through physical violence, but also through harsh verbal incitements.

Violence at home breeds violence at school. It’s not rocket science. Children fed a regular diet of violence will play what is natural and normal for them. The school compound is simply another geographical space with no bearing on how one is supposed to behave. If disputes cannot be settled at home, they can certainly be settled at school.

The interesting finding is that schools grappling with the problem of school violence simultaneously hold the keys to the solution.

It starts with some basic questions and critical data. Who are these students at my school who are known to be violent? What percentage do they represent of the general school population? What is their academic profile? Do they go to school regularly? Who do they hang out with during school time? How do I train my staff to spot the warning signs of violent behavior, especially gate security guards and auxiliary staff? These questions, among other data leading to personalized records, are essential for targeted interventions.

WHERE ARE THE PARENTS?

The most critical issues relate to parenthood. Who and where are the parents? What do we know about them, if any? Is there a history of violence in the family? What is the relationship between parent and child?

After identifying the children and their parents, a carefully designed intervention program should be continued to include professional counseling as well as social service support for the families.

It’s a proven fact that even older teens are salvageable. Young people treated with love and respect produce unimaginable results.

My personal experience of designing and running a project for single men aged 15-25 has amazed sponsors and stakeholders at the achievements. Most beneficiaries have found jobs and have spoken publicly about how the project has transformed their lives. They even formed a youth group themselves called Youth For Change. The project would win a World Bank award for best practices in the hemisphere.

There is nothing wrong with our children. They live what they learn, and for many the lessons are dangerously negative. The vast majority of young Jamaicans who attend school are normal young people who want to learn and who have dreams and aspirations characteristic of youth.

Jamaica does not have a problem with juvenile delinquency. What we have is a family problem, and when we fix family life, we don’t just fix young people, we fix our country.

The majority of children in the country live with a parent or parents in homes and communities. When parents succeed, children succeed. School violence doesn’t require calling in rocket scientists. This requires a call to good parenting.

– Betty Ann Blaine is a children’s rights advocate and founder of Hear The Children’s Cry and Youth Opportunities Unlimited (YOU). Send your comments to [email protected]