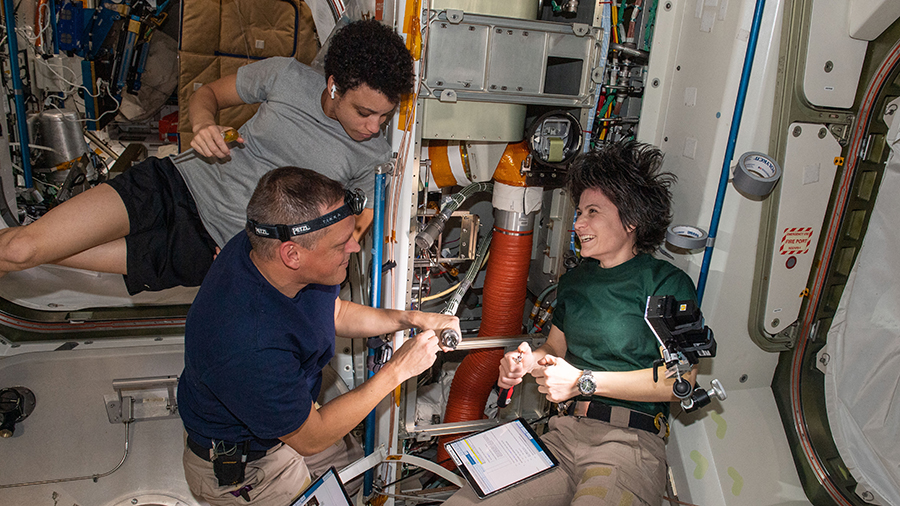 
Preparations for a cargo mission this week and a spacewalk next week keep the Expedition 67 crew aboard the International Space Station busy. The seven orbital residents are also busy with their ongoing research in human biology, space physics and robotics.

The SpaceX Dragon cargo ship attached to the Falcon 9 rocket is set to roll out to the Kennedy Space Center launch pad in Florida soon. It is scheduled to launch at 8:44 p.m. EDT Thursday, carrying 5,800 pounds of science experiments and crew supplies to replenish the orbiting lab. Dragon will orbit Earth for a day and a half before docking at the Harmony Module’s forward port at 11:20 a.m. Saturday.

NASA astronaut Jessica Watkins spent an hour and a half Monday morning studying Dragon’s approach and rendezvous maneuvers. She will be on duty Saturday morning, along with NASA astronaut Bob Hines, monitoring Dragon’s automated docking at Harmony. NASA TV, on the agency’s app and website, will begin live coverage at 10 a.m. on the Saturday of Dragon’s arrival at the station for a month-long stay.

Watkins also took turns with Hines and fellow NASA astronaut Kjell Lindgren taking part in a fitness test on an exercise bike located in the US lab module Destiny. The trio strapped on sensors and cycled for 60 minutes for the VO2Max exercise study that monitors an astronaut’s aerobic capacity.

A Roscosmos cosmonaut and an ESA (European Space Agency) astronaut prepare for the sixth spacewalk scheduled for July 21. Commander Oleg Artemyev and Flight Engineer Samantha Cristoforetti spent all day Monday activating and inspecting a pair of Russian Orlan spacesuits. The duo will work outdoors in the vacuum of space for about seven hours to set up the European Robotic Arm (ERA) for operations on the Russian segment of the station.

Artemyev started his day with Flight Engineer Denis Matveev for an hour-long assessment of their cardiovascular system. Matveev then replaced the smoke detectors and checked the sensors inside the Zvezda service module. Flight engineer Sergey Korsakov worked on water transfers inside the ISS Progress 80 cargo craft, then prepared the ERA for next week’s spacewalk.