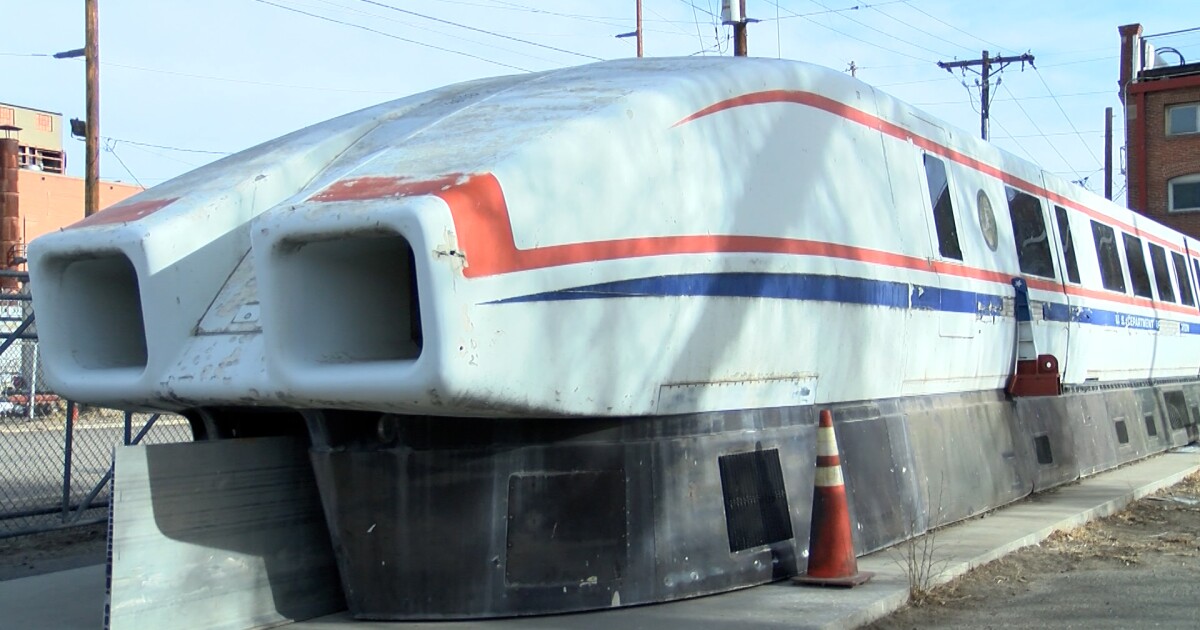 Futuristic vehicles from the past

PUEBLO — Next to the Pueblo Railroad Museum, you can find three “rocket cars“, or prototype high-speed transport/test trains, which showcase a bygone era of experimental overland travel that never materialized.

Before we go any further, here are some brief descriptions and links to each test vehicle:

The Garrett, designed to be a high-speed passenger train, was created to operate at speeds of around 250 mph and was, at times, equipped with aircraft turbines or jet engines to provide power and speed respectively.

The Grumman, according to the Pueblo Railway Foundation website, was a real hovercraft designed to operate at 300 mph. Design inputs from NASA are the main reason why its appearance resembles that of the space shuttle.

The Rohr vehicle rides a 33-inch-high aluminum “inverted-T” reaction rail, with no other rails or wheels on the ground. In operation, the vehicle is supported by a thin cushion of air and propelled forward by its linear induction motor. The interior of the Rohr resembled the first class cabin of a jet airliner and was designed to accommodate 60 passengers.

According to those at the Pueblo Railway Foundation (PRF), this set of futuristic train-like contraptions look so odd that many passers-by mistake them for strange airplanes or even spaceships.

To briefly summarize a large amount of history, these prototypes, curated and maintained by the Pueblo Railway Foundation, represent a period in the 1970s when the Department of Transportation was actively funding research into new and varied options for high-speed and mass transit vehicles.

Testing of these vehicles took place at what was once called the Pueblo High Speed ​​Ground Test Center, which has since been renamed the Transportation Technology Center.

Each vehicle went through a battery of tests over a period of about five years before DOT funding dried up as the department focused on other areas.

From there, the vehicles were donated to the city of Pueblo, which housed them at the Pueblo Weisbrod Aircraft Museum for several years.

After a while, the experimental “rocket cars” had to be moved again, this time to make room for expansions at the museum; the city therefore donated it to the Pueblo Railway Foundation.

After complicated moving procedures, the items in question finally arrived in their new home at the Pueblo Railroad Museum, where they have remained stationed ever since.

The Foundation hopes/expects to make some big building moves over the next few years, this includes a tentative plan to move the “rocket cars” into their own building where they can be sheltered from the elements.

The Foundation would like to work towards restoring these test trains to their former glory and is always looking for the help of the community to achieve this goal.

For more information on these fascinating futuristic vehicles or the Pueblo Railway Museum, CLICK HERE.

On the Scottish Haunting Coast, a village dreams of space