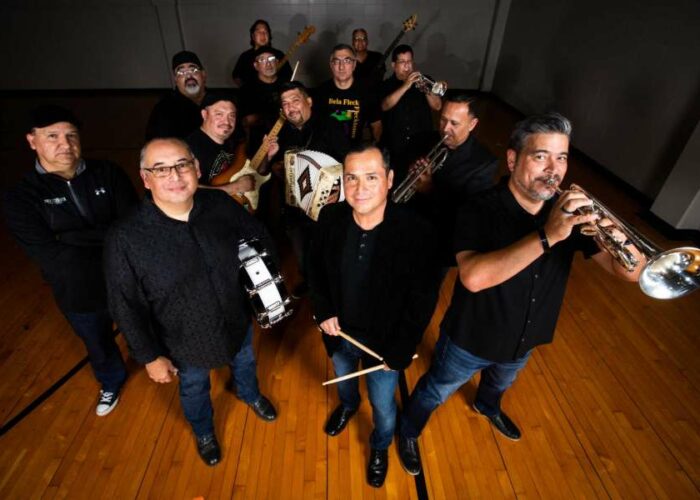 Tejano’s music filled radio playlists and dance halls in the ’80s and’ 90s. Among the most dynamic acts was Houston’s own Latin Image.

Formed in the mid-1980s by students at Wheatley High School in Fifth Ward, the band went through several incarnations, altering their sound and gradually growing a fan base outside of Houston, then Texas and eventually Mexico. The songs “Juntos Para Siempre”, “La Colita” and “Prisionero de Amor” featured rich, full-bodied instrumentation that mixed Tejano with pop sensibilities. The band toured and recorded with genre legend Little Joe Hernandez and performed alongside Selena on New Years Eve 1991 at The Summit (now Lakewood Church).

More than 30 years later, most of the members have separated. Some still pursue music. Many are not. Former bassist Tim Rios was playing Rockefeller with his current band when he remembered playing in the same place with Latin Image so many years ago – October 16, 1988, to be exact. He called a former member of the group with an idea.

“He even found the original ticket. I think the price was $ 4 to get into Rockefeller’s, ”recalls singer Juan Carlos Villegas. He said, ‘How about we get the boys together?’ This is how the idea was born.

They made a few calls and a meeting quickly convened with 14 former members from different stages of the group. They will perform together on Saturday at Rockefeller, almost 33 years after that original show. They tried for October 16th but it was booked.

“Some of these guys haven’t played for over 30 years. But the music is in their blood, ”says Villegas. “When I called them, it didn’t take long to convince them. “

Villegas had just graduated from Austin High School in the East End when he was recruited in 1988 for Latin Image. He sang mariachi as a child and was part of the high school marching band. But it was a whole new experience.

“When I got on board, we started running,” he says. “It was pretty scary, to be honest with you.”

The band started off with the big brass sound that marked so many Tejano acts at the time. Their first albums were released independently under their own Latin Sound Productions. This meant that they did most of the work themselves.

“We made our own vinyl. We peddled our own records. We went from store to store, ”recalls Rios. He joined the group “during what is considered Act Two, around 88”.

Eventually, Latin Image made enough noise that the majors started paying attention. They signed with Sony and recorded two albums with the late Bob Gallarza, a renowned producer who called himself the Quincy Jones of Tejano’s music. The horns were replaced by keyboards and an accordion.

Abraham Quintanilla noticed that the young group was pushing the boundaries of Tejano’s music and reached out. They signed to EMI Latin, the same label as Selena, for 1994’s “Prisionero de Amor”. The album was produced by AB Quintanilla III, who was responsible for his sister Selena’s biggest hits. They toured Texas with Selena, whose album “Amor Prohibido” was released that same year.

Latin Image also changed its name to the Spanish translation, Imagen Latina, to appeal to the Mexican audience.

“It was just a cool ride to be basically in the front seat next to this rocket that was about to take off,” Rios said.

“It’s the worst memory of my life. When Selena was tragically taken from us, pretty much everything stopped under Q Productions, all the bands that were signed, everything,” Villegas said.

He pauses before sharing sweet memories of his tour mate.

“When she walked into a room, she would light it up. She would go up to each of us and give us that hug and that kiss on the cheek, ”he said. “She was truly an angel walking on this Earth.”

Villegas continued to make music, restarting a few years later under the name Negami. It is the word “imagen” spelled backwards. Negami’s debut album was released in 2002. Their most recent, “Live from Houston”, dates from 2019. And despite Tejano’s downward trend since the ’90s, the band continues to perform in crowded venues in the United States. United and Mexico.

The Rockefellers’ reunion is a unique event, despite the obvious idea that it could be a successful tour. People like to remember. Several sections of the room are sold out. However, it will be saved for a future version.

“A lot of these songs, I haven’t heard them for 24, 25 years. I said to Carlos: “We played this before? I couldn’t remember it, ”says Rios. “We have all evolved. We have all lived different lives. We have all had different careers. But there was a story, and we lived that story as friends, brothers, groupmates. We fought, we did not agree. But that’s part of being in a band. It is a celebration. But it’s also a thank you to the people who supported us during this time. We might not have made it to those Grand Slam tournaments, but we had a lot of singles. We hit a lot of singles and we ran a lot of bases. “

Science News Roundup: Climate change is a huge threat to humanity, says Nobel laureate in physics Parisi; Russian actor takes to the skies for world premiere: a movie in space and more

The “Orbital Planes” series documents 30 years of the space shuttle…