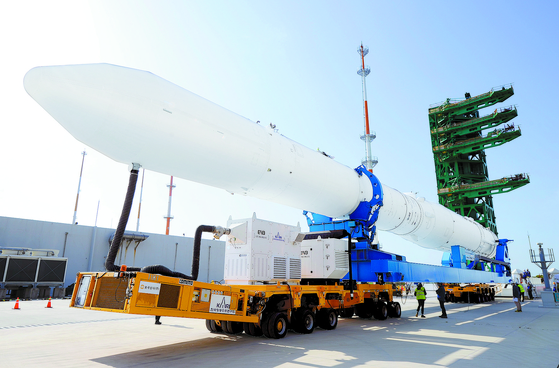 A qualification model of the Korea Space Launch Vehicle-II is transferred to the Naro Space Center in Goheung County on June 1. [KOREA AEROSPACE INDUSTRIES]

Korea will launch a fully developed carrier rocket with local technology into orbit on October 21, a major milestone for the local space industry which has relied on foreign components for all previous launches.

The Ministry of Science and ICT on Tuesday announced the launch date for the Korea Space Launch Vehicle-II (KSLV-2), also known as Nuri-ho, designating the next seven days as alternatives if weather conditions change. turned out to be unfavorable on the planned plan. Dated.

“It is very common for the launch date to change depending on weather conditions,” said an official of a launch management committee at the Science Ministry.

The three-stage rocket is scheduled to undergo a final test on September 30 at the Naro Space Center in Goheung County in South Jeolla, where the KSLV-2 will take off from the launch pad. The test is designed to reproduce various anomalous scenarios involving the intrusion of unidentified flying objects such as drones.

The rocket went through a wet dress rehearsal last month to test its systems under extreme weather conditions.

Boasting six 75-ton liquid-fueled engines in its boosters, the rocket is designed to carry a 1.5-ton satellite into low orbit. The first version of the rocket will carry a fictitious payload of 1.5 tonnes.

The outcome of the launch is critical in assessing Korea’s status in space technology, with nearly 2,000 billion won ($ 1.7 billion) having been funneled into the KSLV-2.

More than 300 companies participated in the project led by Korea Aerospace Industries, Korea’s only aircraft manufacturer.

Hanwha Aerospace took the lead in supplying the engine and other parts, including valves and propulsion pumps, while Hyundai Heavy Industries led the development of the launch pad. Doowon Heavy Industrial played a major role in the construction of the rocket frame.

Unlike its predecessor, the KSLV-I rocket, which borrowed Russian technology, the KSLV-2 is touted as being made up entirely of components and systems developed in Korea.

Its predecessor was the KSLV-I rocket, which put a 100 kilogram (220 pound) satellite into orbit on January 30, 2013 after two failures and several delays.

Only nine countries in the world, including the United States, China, and Russia, have indigenous rocket launch technology.

Despite the high cost and the long preparation, Korea faces an uphill battle to make the first launch a success.

“We cannot guarantee 100% certainty as advanced countries like the United States have a 20-30% success rate for the first rocket launch,” said Oh Seung-hyup, chief of the rocket thruster development division at KAI. “Nonetheless, we remain positive as we have resolved all issues encountered in the development process.”