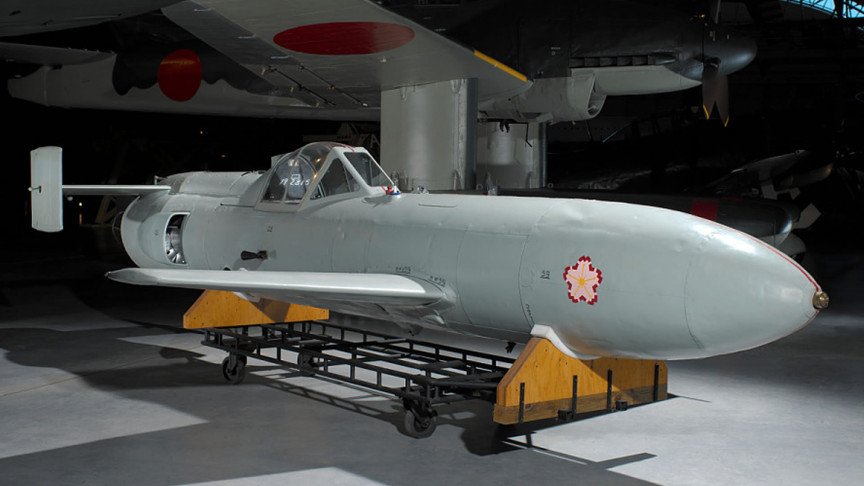 One of the most iconic images of the war in the Pacific during World War II is the strategy employed by the Empire of Japan, which involved the sacrifice of some of its young pilots in suicide ramming missions on the fleets. surface alloys. More than 3,000 kamikaze pilots are said to have been specially trained and prepared for this courageous task, and Kamikaze attacks sank 34 ships and damaged hundreds more during the war. However several either missed their targets, broke their attachment, or were intercepted and destroyed by Allied fighters and anti-aircraft defenses.

However, too many succeeded, resulting in the loss of approximately 7,000 Allied navy personnel. Most of you are probably familiar with using the iconic Mitsubishi A6M “Zero” as your aircraft of choice, but towards the end of the war pilots began using a new type of aircraft powered by rocket specially designed for suicide attacks and launched from bombers – the Yukosuka MXY-7 Ahka.

A seemingly insane idea on the surface, these aircraft were actually developed, built, and launched against the defenses of powerful Allied fleets in the Pacific theater.

But were they effective? Let’s find out.

What was the name of the Japanese rocket Kamikaze?

The infamous Japanese kamikaze rocket was called Yokosuka MXY-7 Ohka (which means “cherry blossom”). The aircraft was also nicknamed “Baka Bombs” by Allied troops. “Baka” comes Japanese for “foolish” or “idiot”, since the strategy of using them was, in the opinion of the Allies, reckless.

It was a human-guided, rocket-powered kamikaze attack aircraft developed and used by Japan against Allied shipping during the Pacific War of World War II. Despite its high speed, the Ohka’s relatively low range required it to be carried into battle as a “parasitic aircraft” by a larger aircraft, such as the Mitsubishi G4M2nd Model 24 “Betty” bomber.

This proved to be a serious weakness as it made them very susceptible to intercepting carrier-based fighters.

Once out of the carrier aircraft, the Ohka first glided towards its target, and when they got close enough, the pilot launched the three solid fuel rockets. It could be done one at a time or all in unison.

With the rocket ignited, the pilot would then fly the missile towards the ship he intended to destroy and do all he could to hit it. It was, needless to say, much harder than it looks.

But, for the target, the high velocity provided by the rockets made it very difficult to counter the threat. Because the aircraft could reach speeds in excess of 400 mph (650 km/h) in level flight and 580 mph (930 km/h) or more in a dive, it was difficult for defenders to concentrate and eliminate the incoming guided missile.

However, Ohkas could sink or damage some escort ships and transport ships during the Battle of Okinawa in 1945, but no major warships have ever been sunk. Improved versions that sought to correct the flaws of the aircraft were created too late to be deployed.

For example, on April 12, 1945, the Allen M. Sumner-class destroyer USS Mannert L. Abele became the first casualty Allied ship in the Ohka while hiding in the waters off Okinawa. Over the entire operational history of the craft, Ohkas managed to sink or damage three ships beyond repair and severely damaged three others, accumulating a total of seven US ships damaged or sunk by Ohkas during the war.

Throughout the war, somewhere in the region, 34 allied ships were sunk (a mixture of destroyers, minesweepers and some larger capital ships and support ships). While hundreds more were damaged by kamikaze attacks – a pittance for the loss of thousands of young past lives.

Several variations of Ohka were designed, built and tested, but by far the most numerous were the Ohka-11 variant.

It was essentially a 2,600-pound (1,200-kilogram) bomb with wooden wings, powered by three Type 4 Model 1 Mark 20 solid-fuel rocket motors. Of all the Ohkas built, somewhere in the region of 755 Ohka-11s were built.

Other variants were developed with mixed success, but only the Ohka-11 actually saw active service. Later versions of the Ohka were intended to be launched from coastal airbases, caves, and submarines with aircraft catapults, although none were ever used in this manner.

Since there were a series of variants, we will provide the details for the most common version, the Ohka-11.

Armament: A 2,600 lb (1,200 kg) ammonia warhead in the nose. Ammonal is an explosive composed of ammonium nitrate and aluminum powder.

What is a kamikaze type attack?

During WWII, kamikaze (“divine wind”) style the attacks were a Japanese suicide bombing strategy used to destroy opposing surface ships (the attacks were also used against the B-29 Superfortress, but with very little success).

Pilots intentionally flew their specially adapted aircraft (such as the Mitsibushi “Zero”) towards and into enemy ships.

Suicide bombings of Japanese pilots were also seen in the early stages of the Pacific War, but more as a kind of ultimate, desperate sacrifice once their aircraft were fatally wounded. For instance. During the Attack on Pearl Harbor in 1941several pilots used their damaged aircraft as ad hoc flying explosives.

But these were not suicide attacks. In fact, Allied and Luftwaffe pilots are also known to have done similar things with their damaged aircraft. It was rare, but it happened.

“Real” kamikaze attacks, i.e. attacks using specially trained pilots in specially adapted aircraft, did not really begin until around the fall of 1944.

By this point in the war, the tide of war had turned against Imperial Japan. The Japanese forces were experimenting with many tactics in an attempt to cause as much damage as possible to the advancing Allied forces with the dwindling resources available to them.

Kamikaze attacks, including those using Yokosuka MXY-7 Ohka, ultimately had little impact on the outcome of the war. While this was a formidable attack to face as a defender, tactics were quickly developed to counter them, making the whole effort completely reckless, or “Baka”, as the allies would eventually call him mockingly.

What weapons has Ukraine received from the United States and its allies? | News…