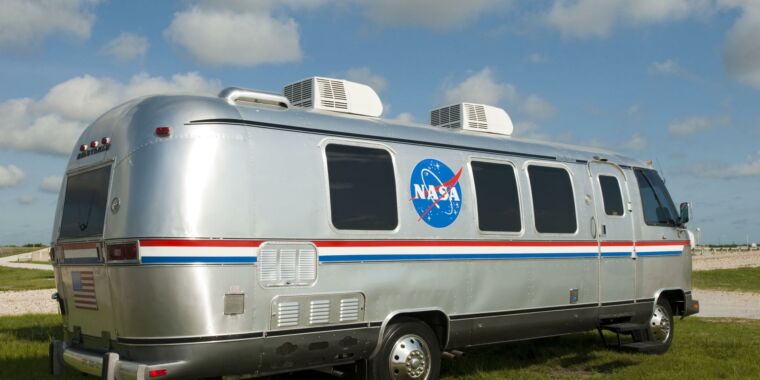 NASA has asked the industry for ideas to develop an “Artemis crew transport vehicle” that will take its astronauts from equipment installations to the launch pad on launch day.

The space agency, of course, has not launched its own astronauts on a vehicle built by NASA since the space shuttle program ended in 2011. From 1984 until the end of the shuttle era, the agency used a modified Airstream camper van, known as “Astrovan”, to transport crews to the launch pad. This iconic vehicle had a shiny silver exterior but a fairly spartan interior. “The appeal of the current vehicle is rooted in its tradition rather than in its decor”, the agency recognized in 2011.

Now, NASA is gearing up for a new era of deep space exploration, and it plans to launch four astronauts at a time inside the Orion spacecraft, atop a Space Launch System rocket. The first human flights on these vehicles could take place in late 2023 or early 2024, according to NASA administrator Bill Nelson said recently.

While it took literally decades and tens of billions of dollars to develop the spacecraft and rocket, NASA is hoping its launch pad can be outfitted a bit faster. In his solicitation, released Friday, NASA says its “Artemis CTV” should be delivered no later than June 2023.

NASA is considering three different options for the new vehicle. A supplier can build a custom vehicle, modify a commercially available vehicle, or repair and refurbish the venerable Astrovan.

As part of its solicitation, NASA has a long list of requirements for its Artemis transport vehicle. Among them:

According to Ars automotive publisher Jonathan Gitlin, an existing zero-emission vehicle is unlikely to meet these requirements, even with modifications. Ford’s next electric Transit Van could get closer, Gitlin added.

The best option, in fact, may be to renovate the old Airstream. Indeed, the vehicle will not be called for particularly long journeys – there are only a few kilometers to and from the launch pad – and this request would be well within the capacities of a few Tesla drive units and a battery slab.

With the Artemis program, NASA returns to the Moon like in the 1960s. It uses a capsule design, similar to that of Apollo, and a large rocket with space shuttle main engines designed in the 1970s. So, why shouldn’t astronaut transport be retro too?