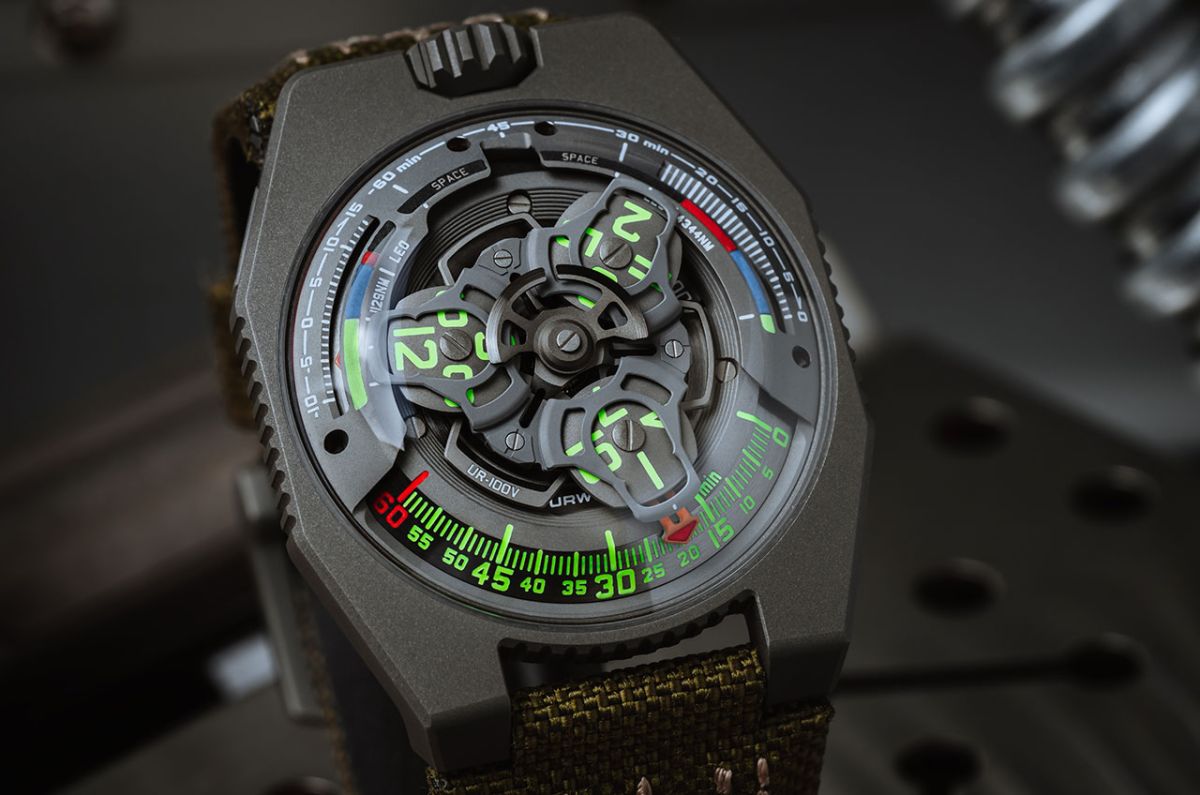 The analog dials and displays used to pilot a 40-year-old NASA space shuttle inspired the look of a new avant-garde timepiece.

The UR-100V P.02 wristwatch, which was unveiled on Tuesday, July 20, merges Swiss luxury watchmaker Urwerk’s unique approach to displaying the time with the aesthetic of the cockpit of the space shuttle Enterprise. The watch is the result of a partnership between Urwerk and Collective Horology, a club of watch enthusiasts based in Silicon Valley, with the Intrepid Sea, Air & Space Museum in New York, which features the Retired Enterprise. .

â€œI knew they wanted to do the classic shape of the space shuttle in black and white and things like that,â€ Eric Boehm, aviation curator at Intrepid, said of the co-founder and designer in Chief of Urwerk, Martin Frei. “I can see, looking at the [Enterprise’s] instrumentation, exactly where Martin’s inspiration came from. “

â€œI’m a huge fan of cockpits and the instruments that come with them,â€ Frei said. “I can look at it as an aesthetic language, which is not only at the service of the pilots. It is, for me, really a style.”

Unless you’re already familiar with Frei’s work, the UR-100V P.02’s appearance can be confusing at first, unlike any other wristwatch you’ve seen before. Instead of the traditional hands pointing to a single set of digital markers positioned around a dial, Urwerk’s timepieces use orbiting satellites to display the time, with hands indicating minutes and other data.

â€œThe only thing I want people to feel when they watch it is the exploration and all that is bold,â€ Frei said. â€œWhen you have an everyday object and make it look different – the timekeeping works differently – it shows you somehow that things can be different. It may look different, but it can also work differently and it can transport you and travel through space. “

Earlier models of the UR-100 used the watch mechanism to indicate the position of the Earth in the solar system. For the UR-100V P.02, the wearer can get an idea of â€‹â€‹what it was like to take the space shuttle into orbit and come back to a runway for a landing.

â€œYou have these two extra side cues on the sides that we use to indicate space travel on one side and on the other, back to Earth,â€ Frei said.

In addition to providing a minute-by-minute guide, these openings display the approximate location of the Space Shuttle during each phase of a launch and landing (the exact timing varies from mission to mission). The minutes marked in green represent the spacecraft while it was still on Earth. Blue indicates the shuttle traveling in the Earth’s sky or in the lower atmosphere. Red symbolizes the upper atmosphere and black indicates time in space in low earth orbit.

â€œWhen you get your hands on the P.02,â€ said Boehm, â€œyour impulse is immediately to watch the Wandering Time complication unfold. Watching the needle wander through the typical shuttle launch sequence space, you can really think of what seven minutes it must be like sitting on top of a rocket. “

The manual that comes with the UR-100V P.02 not only explains how to read and use the watch, but also goes into some of the details of a shuttle mission in depth.

â€œWhat we love and think is exciting is that a watch is a creative canvas on which stories can be told. We don’t imagine ourselves as watch designers but, due to our marketing background, we do consider ourselves like storytellers, â€Asher Rapkin said. , who with Gabe Reilly, founded Collective Horology.

The UR-100V P.02 honors the 40th anniversary of NASA’s space shuttle program, which first reached space in 1981. The last and 135th mission returned from space 10 years ago years Wednesday July 21.

Available exclusively for sale at Collective watchmaking members and limited to just 20 pieces at $ 62,500 each, the sale of the UR-100V P.02 will also help ensure that the Enterprise space shuttle can be supported by Intrepid for years to come.

â€œWe and Goldsmith & Complications, the official authorized reseller, will donate a total of $ 50,000 from the proceeds of this project to Intrepid Museum to help ensure that Enterprise’s stories of bravery and innovation are told for generations to come, â€said Rapkin.

â€œI was thrilled to help bring P.02 to life,â€ said Boehm, â€œtaking inspiration from the design of Enterprise’s cockpit instruments to help tell the story of some of the most important moments. dramatic shuttle program. “