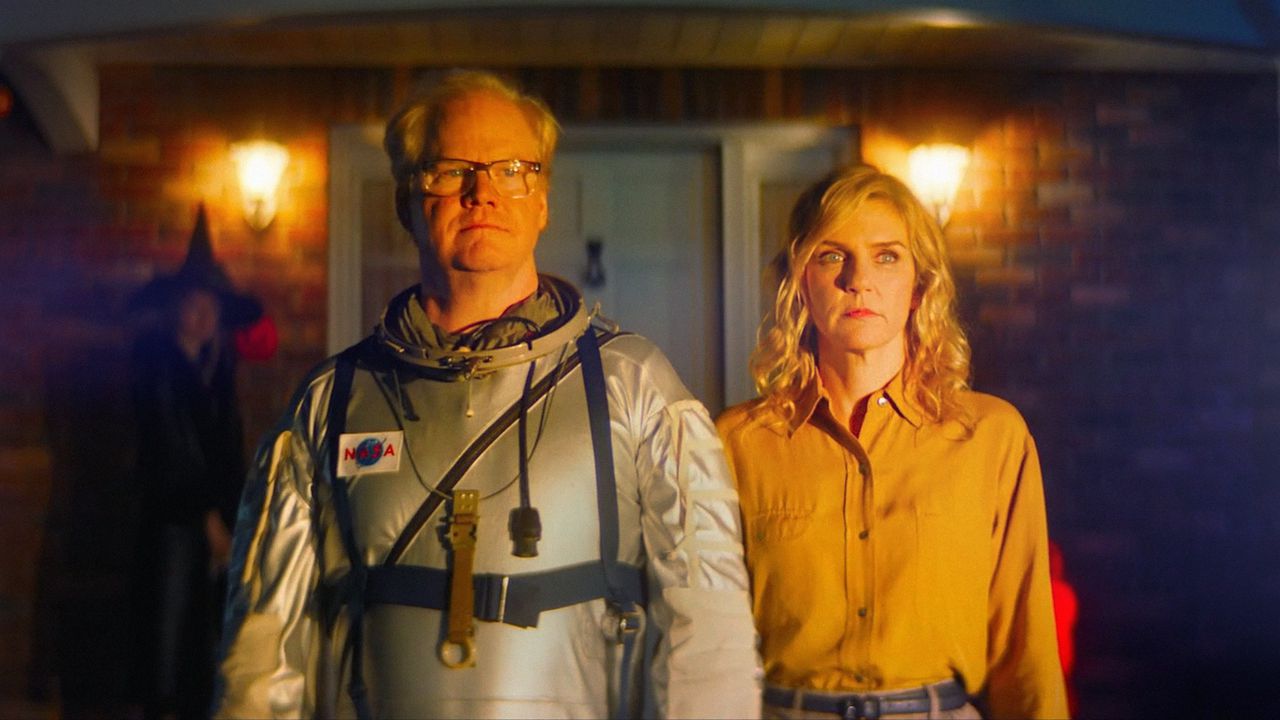 CLEVELAND, Ohio — More than 15 years after their first involvement in filmmaking, a trio of Ohio filmmakers have come together to create “Linoleum.” The film, starring Jim Gaffigan and Rhea Seehorn, closes the Cleveland International Film Festival with a 7 p.m. screening on Saturday, April 9.

Tickets are available for the screening for $16 at CIFF website.

Writer and director Colin West and producers Chadd Harbold and Chad Simpson have all teamed up on the dark comedy flick, based in the fictional Ohio town of “Fairview Heights,” just outside of Dayton.

The trio drew inspiration from Ohio’s aviation history for the film, which follows Cameron (Gaffigan) as he builds a rocket in his garage, pursuing his dream of becoming an astronaut. Despite its wacky plot, “Linoleum” is a love story at its heart, inspired by West’s grandparents’ 70-year relationship, the director said.

“Ohio is the birthplace of aviation,” West said. “I think there is a real connection. There’s a lot of rocket throwback going on in Ohio and especially in Dayton.

West, Harbold and Simpson also leaned into their own upbringing in Ohio for the filming of the film. The three all graduated in the mid-2000s from Upper Arlington High School, where they first discovered their love of filmmaking.

“I met Colin in high school, I knew Chadd Harbold from playing little league with him,” Simpson said. “We were all in the broadcast program at Upper Arlington with our teacher, beloved Joe Conley, who died after our freshman year. He really helped us to love cinema in these classes. Racing with cameras in those days was sort of our training wheels for our future careers.

The three Ohio natives have since moved on, working in the production of various independent feature and short films. Prior to “Linoleum,” West directed, wrote and produced the 2021 horror film “Double Walker,” and Simpson co-produced the 2013 film “Free Ride.” Harbold has worked on dozens of films, including “Long Nights Short Mornings”, “Villains” and “Most Beautiful Island”.

Over the years that have passed, the three films have stayed in touch, often collaborating or sharing storylines with one another.

“We’ve worked here and there, but I think that’s the biggest project that we’ve all worked on together, for sure,” West said.

The cast and crew filmed “Linoleum” in October and November 2020, amid lockdowns and coronavirus protocols. Harbold used his experience working on “They/Them/We,” a film shot in Ohio in July 2020, to prepare the group for rigorous COVID testing, social distancing and other precautions.

“I learned a lot about how to do it right, early on, on a low budget,” Harbold said. “It was neither easy nor cheap. Everyone was very afraid of this brand new paradigm. When shooting a movie, you have a very close group of people, all breathing the same air and touching the same things – eating together and living together.

Filmed in upstate New York, “Linoleum” brought the cast and crew together in a bubble of a Best Western Plus, taking over a wing of the hotel. The crew followed Screen Actors Guild COVID-19 protocols, Harbold said, with a COVID compliance officer on set.

“On this film, we performed over 700 COVID PCR tests, in the span of five weeks,” Harbold said. “We would do that and then all the cast and crew wore masks for the entirety of our 12+ hour days, obviously except when the cast was on camera. It was quite a colossal undertaking. »

With all precautions, no one fell ill with COVID-19 while filming “Linoleum,” the producers said.

“Everyone really sacrificed their social lives to help work on this movie,” Simpson said. “It was a super inspiring thing, it’s something I will always be grateful for and in awe of everyone who worked on it.”

“Linoleum” screened at two festivals ahead of CIFF, and later this month will screen closer to Harbold, Simpson and West’s hometown when it airs at Cinema Columbus Film Festival April 27 at the Southern Theater.

West said seeing his film in Ohio was fulfilling — and that he, Harbold and Simpson plan to make future movies in the state.

“We are so excited for this kind of homecoming for us. Granted, we’re all from Columbus, but we all have that Ohio pride and we’re excited to play in our home state,” West said. “We want to make movies and that’s where we started making movies, in Ohio. That full circle is something that inspires us. I don’t think it’s going to be the last.”

Get the weekend off to a good start and Register for cleveland.com weekly “In the CLE” email newsletter, your essential guide to the best things to do in Greater Cleveland. It’ll hit your inbox on Friday morning – an exclusive to-do list, focused on the best of weekend fun. Restaurants, music, movies, performing arts, family fun and more. Click here to subscribe. All cleveland.com newsletters are free.