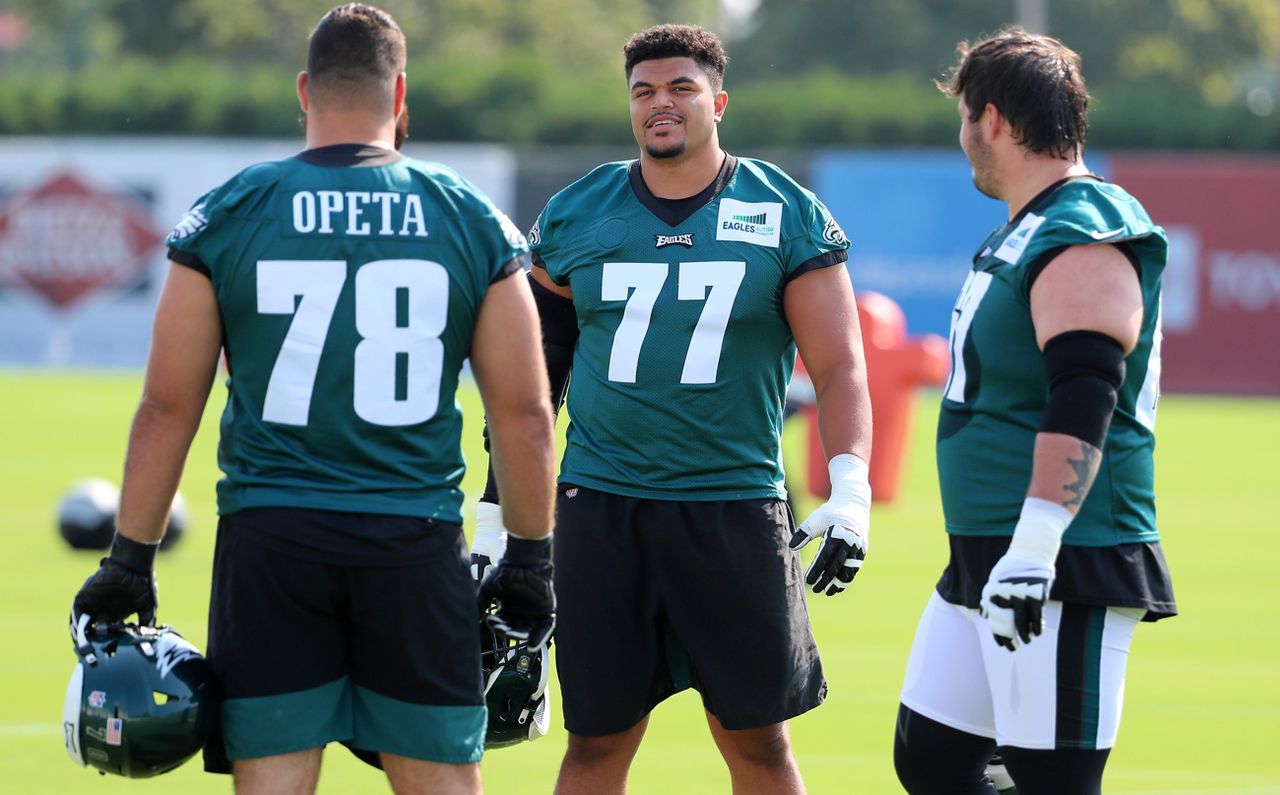 PHILADELPHIA CREAM – The Eagles worked with shells and shorts on Tuesday during their 11th training camp practice at the NovaCare complex.

Sign up for Eagles Extra: Get exclusive information, behind-the-scenes observations and the ability to text journalists directly to reporters

The training served as the final training camp for the team before Thursday’s opening game against the Pittsburgh Steelers at Lincoln Financial Field.

Trio of injuries to start practice

The Eagles’ last training session before their first preseason game was eventful. Left tackle Andre Dillard went to the medical tent at the start of training and stayed there for about 10 minutes, which is longer than the typical visit. He limped out of the tent and entered the facility and did not return to practice.

Even a minor injury for Dillard could put a damper on left tackle competition with Jordan Mailata. As it stands, Mailata has performed much better in one camp. If Dillard is forced to miss a preseason or two and Mailata plays well, the former first-round pick will likely be moved to the bench in Week 1.

Dillard wasn’t the only notable name to leave training with an apparent injury. Safety K’Von Wallace, who worked with the first team defense as a replacement for Rodney McLeod (knee, PUP), walked with a coach inside the facility and did not return. Third-year security Marcus Epps will likely be asked to take his place.

Shortly before Wallace stepped inside, wide receiver Michael Walker, who was already suffering from a foot injury, was transported to the facility. He hopped on the cart and took a spin, which isn’t a good sign for his chances of playing in the preseason.

The Eagles’ public relations department cultivated their first preseason depth chart on Tuesday. There were a few notable locations in the depth chart:

Here is what stands out:

– DeVonta Smith and Jalen Reagor are listed as the starting outside wide receivers and Travis Fulgham and Quez Watkins are listed as their immediate saves, respectively. As NJ Advance Media projected in our latest 53-man roster prediction, the top six WRs (Smith, Reagor, Ward, Fulgham, Watkins and Arcega-Whiteside), barring injury, should be on the squad.

– While third-round lineman Milton Williams played a defensive side, he’s listed as the three-way save technique behind Fletcher Cox. Hassan Ridgeway is the backup nose tackle behind Javon Hargrave.

– The starting linebackers are Alex Singleton (WILL), Eric Wilson (MIKE) and Genard Avery (SAM). The second team linebackers are Davion Taylor (WILL), TJ Edwards (MIKE) and Joe Ostman (SAM). Avery is currently out, so Ostman could start on Thursday.

As the camp approached, there was some internal concern about Jalen Hurts’ ability to consistently target tight ends. Due to Hurts’ (6-1) limited height at position, tight ends could get lost in the way of the trenches. Hurts allayed those concerns – at least in training camp – as he regularly targets Goedert and Ertz.

Hurts had a strong 11-11 day, with most of his success coming from assists to Ertz and Goedert. During one spell, Hurts connected with Goedert twice in the middle for 15 to 20 yards. Hurts also targeted Ertz on a few intermediate throws.

With the large receptors facing injury and inexperience, Hurts’ targeting of tight extremities and their overall chemistry is worth watching.

According to Eagles head coach Nick Sirianni, Hurts will start the preseason game against the Steelers with first-team offense, but it’s unclear how much he’ll actually play in the game.

Defensive end Ryan Kerrigan opted to have thumb surgery this week. Kerrigan injured his hand during the first week of training and has been in limited use since then. According to the team, Kerrigan is expected to miss 7-10 days as he recovers from the procedure.

Kerrigan shouldn’t miss any regular season time. He will be a pass carrier and linebacker for the Eagles.

The Eagles face several injuries heading into the preseason game with the Steelers.

– Wide wide receiver Andre Patton made an impressive diving catch to the touchline in 11-11 drills.

– RB Kenny Gainwell has been used a lot on screens and controls with second and third team offense lately.

– Blake Countess, the recently resigned security, wore No.36 in training. It’s his Fourth with the team that drafted him in 2016.

– Slay and Nelson, the two starting outside cornerbacks, both had impressive pass breakups in 11-on-11 drills. Slay snapped a pass from Hurts to Reagor in the middle. Nelson snapped a similar pass from Hurts to Fulgham. After training, LB TJ Edwards said he believes Nelson is going to stand out this season.

– Physical play alert: In an 11v11 repeat, RB Kerryon Johnson moved from one side of the backfield to another after the ball was broken and was pierced in the chest by DE Derek Barnett. Barnett hit Johnson so hard he had to remove his helmet and breathe deeply behind the attacking squad after the game.

– The Eagles will be hosting a private tour on Wednesday that will not be open to media. NJ Advance Media will have full coverage of Thursday’s preseason opener against the Steelers on Additional eagles (Join FREE for two weeks now) and NJ.com.

Receive SMS from Eagles: Take the clutter out of social media and text straight with beat writers Mike Kaye and Chris Franklin. Plus, exclusive news and analysis. Register now for a free trial.

Our journalism needs your support. Please register today for NJ.com.

Mike Kaye can be reached at [email protected]. Tell us your coronavirus story or send a tip here.