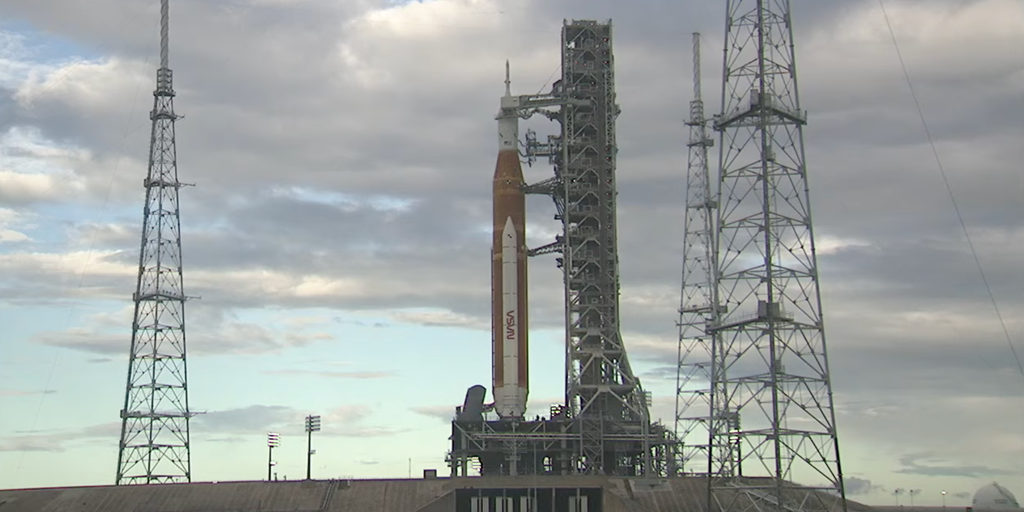 NASA is set to verify engineers’ work to repair a fuel leak on the Artemis-1 rocket, which wiped out the space agency’s last attempt to launch the mega lunar rocket from Kennedy Space Center in Florida.

The Space Launch System rocket with the uncrewed Orion spacecraft is set to launch on its maiden voyage known as the Artemis-1 mission, sending Orion around the moon and back.

A refueling test is underway at KSC on Wednesday morning that will determine if a fuel leak is repaired on the giant moon rocket.

Watch the live pit test below:

During the test, NASA will attempt a “softer, gentler” approach by using lower pressure to fill the 322-foot-tall SLS rocket with thousands of gallons of cryogenic fuel to determine if repairing a leak of liquid hydrogen succeeded.

“We’re taking these transitions at a slower pace. The tightening of pressure and temperature changes will be more gradual,” Whitmeyer said.

The cryogenic load test will be another long day for NASA teams and is expected to last 8-10 hours once it gets underway.

After a brief delay due to someone in the blast danger zone, launch director Charlie Blackwell-Thompson gave the “go” to begin refueling at 7:30 a.m., about half an hour behind the timeline. initial.

The filling of the central stage with liquid oxygen was in progress in the middle of the morning and the teams began the slow filling with liquid hydrogen at around 9 am.

During the test, the SLS core and upper stages will go through all three refueling phases, including slow fill, fast fill, and replenish.

NASA has now attempted to launch the rocket from Earth twice. Both attempts resulted in the cancellation of the launch.

During the last attempt, on September 3, a liquid hydrogen fuel leak caused the launch director to scrub takeoff.

The SLS requires more than 700,000 gallons of super cold liquid hydrogen and liquid oxygen to lift the 322-foot-tall rocket off the launch pad and into space. While it is an efficient rocket fuel, hydrogen is a tiny molecule that leaks easily. This has already created problems for the space shuttle program.

KSC Launch Pad 39B crews have been working over the past two weeks to replace two quick-disconnect seals on the rocket in hopes of fixing the leak, which NASA officials described as a “major leak “well above the 4% limit.

At one point during the refueling, the leak “climbed” to more than 8%, Jeremy Parsons, KSC Exploration Ground Systems deputy program manager, said of the Sept. 3 attempt.

“The reason 4% is fixed is its hydrogen and air flammability type. So that’s where you start to enter some flammability hazard,” Parsons said.

WHAT WILL NASA’S ARTEMIS 1 MISSION DO?

NASA SLS chief engineer John Belvins said after looking at all the possible causes on the fault tree, he doesn’t think a single thing caused the leak.

On the 8-inch seal, engineers found an “indentation” that could have been caused by a blow from what NASA calls FOD, which stands for “foreign object debris.” However, no FOD was found near the seal.

Forecasters will watch for lightning

The September 21, 2022 forecast for NASA’s Artemis-1 refueling test of the SLS rocket.

NASA requires certain weather criteria before the SLS rocket can be fueled or launched.

Forecasters from the 45th Space Force Weather Squadron will continue to monitor the weather ahead of the “go” for refueling.

On Wednesday, launch weather officers were monitoring some storm cells a few miles off the coast of the launch complex. However, the rain will not stop the test.

“Meteorologists are currently predicting favorable weather conditions for the test with a 15% chance of lightning within 5 nautical miles of the area, which corresponds Criteria required for the test,” NASA said in a blog post on Tuesday.

The Launch Director will not give the “go” to begin tanking the rocket’s core stage if the chance of lightning is greater than 20% within 5 nautical miles of the launch area.

Refueling also can’t start if the 24-hour temperature is below 41.4 degrees Fahrenheit or above 94.5 degrees, but that shouldn’t be a problem in mid-September. The high expected on Wednesday will be in the 80s.

If the refueling test is successful, teams are targeting Sept. 27 for liftoff during a 70-minute window opening at 11:37 a.m. However, it all depends on the outcome of Wednesday’s cryo-loading and whether NASA gets Space Force approval.

“Ultimately, we’ve mitigated everything we can think of, and we’ll know within (the next) 36 hours or 48 hours how effective those mitigations were,” Belvins said Monday.

A Sept. 27 launch date and a backup Oct. 2 window are under review by Space Force, which manages the eastern launch range.

Earlier, NASA said the moon rocket would have to return to the Vehicle Assembly Building (VAB) due to safety requirements to replace the Flight Termination System (FTS) batteries. FTS is required on all rockets and would cause the vehicle to self-destruct if it veers off course and threatens the public.

“They’re responsible for every vehicle they launch, not just ours,” Blevins said of Space Force. “And they will decide whether or not we meet public safety requirements and respect that decision.”

The agency has submitted a waiver to extend FTS certification and is awaiting a response from Space Force.