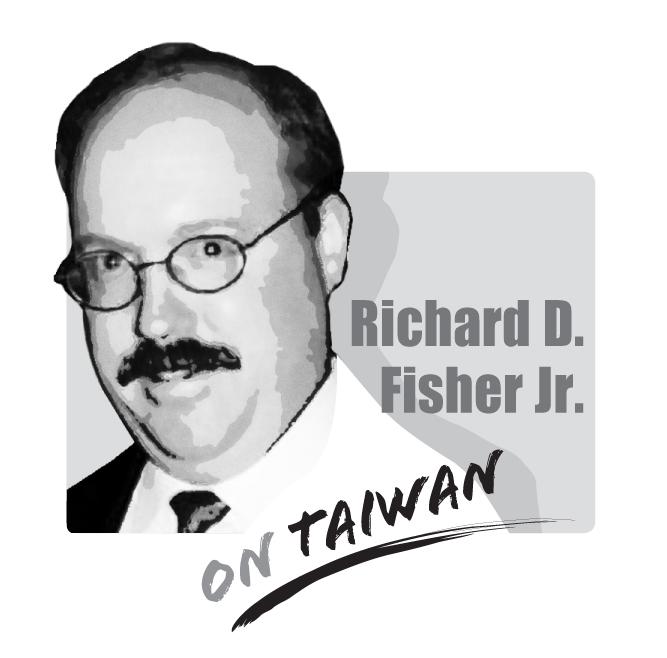 For Taiwan, the United States and its allies, it is crucial to step up countermeasures to the Chinese Communist Party’s (CCP) campaign of military intimidation and coercion lest it become convinced that it can get away with minor assaults contributing to the confidence to undertake an invasion of Taiwan.

Taiwanese President Tsai Ing-wen (蔡英文) seems to understand. While on a weekend tour of the Dragon Boat Festival on June 2, 2022 of Taiwan’s 66th Marine Brigade, without warning, she stopped to pick up and feel the Kestrel Shouldered Infantry Rocket designed and made in Taiwan.

At that time, President Tsai herself was showing Taiwanese and the free world that it is possible to challenge the CCP’s invasion and hegemony – if she can fire an invading vehicle-killing rocket, everything another adult citizen of Taiwan can too.

It was a most serious gesture, reminiscent of British Prime Minister Winston Churchill’s late July 1940 visit to Hartlepool to inspect the coastal defences, where he was photographed with a Thompson submachine gun, clutching his cigar.

Churchill rallied the British with a much-needed image of defiance at a time of justified fears of a massive German amphibious invasion, as the Battle of Britain was far from decided.

Today the battle of Taiwan is far from being decided and it is possible that it will continue like this. Yet, it is important to consider how far the CCP and its People’s Liberation Army (PLA) have come.

Photo: the presidential office via AFP

During the Taiwan Crises of the 1950s, it was Taiwan’s Air Force that fought in the skies above China – not Taiwan. The United States, an official military ally of Taiwan, saw fit to send Matador cruise missiles with 20 kiloton tactical nuclear warheads to Taiwan and was ready to use them.

But with the help of American, European, Israeli, and then Russian technology, CCP leader Deng Xiaoping (鄧小平) was able to begin the rearmament of China, which in 1995 his successor Jiang Zemin (江澤民) began to focus on Taiwan, firing DF-15s and DF-11 missiles to intimidate voters on the island in 1995 and 1996.

Then, in 1999, a much more powerful PLA Air Force (PLAAF) began patrols towards the center line, effectively taking control of half of the Taiwan Strait, an air presence that increased in the decade of the 2000s under Hu Jintao (胡錦濤).

Current CCP leader Xi Jinping (習近平) exploits new waves of modernization in the PLAAF and PLA Navy (PLAN) by escalating into what has become a virtual war around Taiwan, beginning around 2015 with patrols occasional H-6K nuclear-capable bombers around Taiwan until today. the third year of near-daily groups of fighter and intelligence support aircraft harassing the island.

In May 2020, this campaign of intimidation escalated on two levels. For the first time, the aircraft carrier PLAN Liaoning, operating in a full battle group east of Taiwan, coordinated with large groups of combat aircraft operating in the south and east of the island .

Then, on May 24, four PLAAF H-6K bombers and two Tu-95MS bombers from the Russian Air Force joined for the fourth joint China-Russia bombing exercise.

First, over the Sea of ​​Japan, then in the area where the Liaoning Battle Group was exercising, this again demonstrated that Russia will support the CCP’s aggression against Taiwan and potentially engage in joint nuclear operations with the PLA against the United States and other countries. who can come to defend Taiwan.

So far, the CCP and the PLA have not fired on Taiwanese planes responding to the PLA’s intimidation drills, nor have they shot down any of the many Japanese, American and allied planes that responded to the intimidation drills. aerial intimidation of the PLA in Japan, Taiwan or the South China Sea.

But on May 26, the PLA demonstrated that it could cross that line, when somewhere in the South China Sea, a PLAAF J-16 attack fighter harassed a P- 8A of the Royal Australian Air Force firing flares while crossing sharply close to the nose of the P-8A.

These flares only had time to create small blooms of metallic particles, but they could be dense enough to damage the engines of the Australian patrol aircraft, and if this damage were caused near new Chinese bases in the Paracel or Spratly island groups, far from diversionary airfields in the Philippines or Malaysia, the P-8A may have to land at a new Chinese base where it will be captured and exploited for intelligence purposes.

The fact that China will continue to push the limits of its coercive exercises until it begins to “kill” Taiwanese, American, Japanese or Australian aircraft has been amply demonstrated by two long-running military campaigns in Asia that China is undergoing. to win.

First, with virtually no physical pushback, China has successfully bullied Southeast Asia and the United States since the mid-1970s with a gradual campaign to occupy islets in the South China Sea. which culminated in the rapid construction in the late 2000s of new large naval vessels. – missile bases in the Spratly Islands group.

Second, since the early 2010s, facing no sanctions or penalties, China has transferred enough missile-related technology to help transform North Korea into a nuclear missile state.

In addition to increased interceptions of PLA aircraft by Taiwanese and Japanese Air Force fighters, and more recent Japanese use of small carriers to track larger carriers PLAN, a sophisticated US military response to China’s escalating bullying has begun.

This has included regular US Navy exercise patrols, sometimes in response to PLAN exercises, and a large number of US aircraft patrol operations. This activity was not “announced” by the Pentagon, perhaps to prevent domestic alarm.

Now, however, it is necessary to begin to demonstrate to the PLA that its aggression will lead to mass losses of PLAN ships and PLAAF aircraft.

This is necessary both to deter the CCP from beginning to kill occasionally as part of its harassment, and to deter it from deciding to undertake major assaults such as an invasion of Taiwan.

As the PLA has long used simulations of Japanese and American fixed bases in Asia for precision long-range missile exercises, and has developed mobile target platforms to practice anti-ship ballistic missile strikes against carriers. -US Navy planes, it’s time to give the CCP some of the same medicine.

As the PLA will primarily rely on large “civilian” roll-on-roll-off (RORO) ferries and civilian cargo and passenger aircraft to transport the bulk of its troops, armor and occupation forces to Taiwan, the United States, Japan and Taiwan should build large plastic simulations of these ferries which explode spectacularly when hit by anti-ship missiles.

Along the same lines, Taiwan could easily build large and accurate display boards of different Chinese airframes to be used for target practice by marine, army, police and force units. Taiwanese reserves armed with anti-aircraft artillery, and even shoulder-launched Kestrel rockets.

Another impressive countermeasure to CCP intimidation would be to increase joint US-South Korean force exercises to levels approaching 200,000 troops, similar to the “Team Spirit” exercises of the 1980s.

Additionally, Japan and the United States could launch a series of large amphibious and airborne assaults to defend or retake sparsely populated islands in the Ryukyu Island chain, especially some near Taiwan.

The CCP and the PLA use their campaigns of intimidation and coercion to help train for real wars against Taiwan, Japan, South Korea, the Philippines, Australia, India and the United States. United.

It is time for the United States, its allies, and Taiwan to launch counter-intimidation training campaigns with increasing kinetic effects that demonstrate to the CCP that it will lose any war it starts.

Richard D. Fisher, Jr is a senior researcher at the International Center for Assessment and Strategy.

Comments will be moderated. Keep comments relevant to the article. Remarks containing abusive and obscene language, personal attacks of any kind or promotion will be removed and the user banned. The final decision will be at the discretion of The Taipei Times.