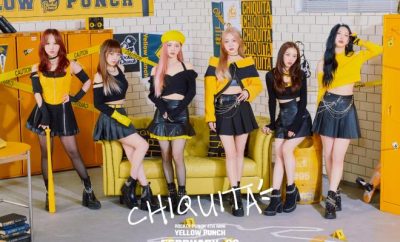 Rocket Punch returns with glamor in his mini-album “YELLOW PUNCH”

After nine months, Rocket Punch will make a classy and confident comeback with their fourth mini-album, YELLOW PUNCH.

Rocket Punch will be making a comeback nine months after their last release, releasing their fourth mini-album titled YELLOW PUNCH. The project continues the band’s ‘COLOR COLLECTION’, showcasing a new side to the band.

The EP focuses on yellow, the color closest to light. As a result, the album’s central inspiration is the track where those who roam it can confidently bask in the spotlight.

The lyrics exemplify the classy and confident energy of the group while the song itself becomes a catchy favorite for K-Pop fans with its addictive hook.

In their promotional content, the members showcased their stunning visuals which showcased their cool chic but also captured their unique and energetic charisma. With their improved performances, the group plans to deliver their best comeback yet.

Besides, YELLOW PUNCH includes a variety of tracks from different genres that will showcase the talents of the members. The six songs include: the intro of the same name as the album, “YELLOW PUNCH”, “In My World”, “Red Balloon”, “Yesterday, More Than Tomorrow” and “LOUDER”. With the diverse track list, Rocket Punch portrays their broad musical spectrum and continued growth from era to era.

Rocket Punch will be making a comeback with their fourth mini-album, YELLOW PUNCH, on February 28 at 6 p.m. KST. Fans can listen to the project on various music streaming platforms.

How does this story make you feel?