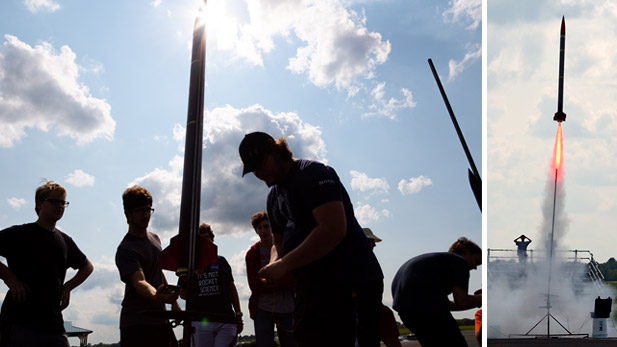 Increased student interest and lessons learned from the past year have Rose Rocketry Club members excited to launch their aspirations to participate in NASA’s 2023 Student Launch Challenge.

The team is well on its way to achieving its goals of designing, building and flying a high-powered amateur rocket that carries a scientific payload to an altitude of between 4,000 and 6,000 feet. The nine-month challenge will conclude with an on-site launch near NASA’s Marshall Space Flight Center in Huntsville, Alabama in April 2023.

This is the second year in a row that the Rose Rocketry Club has been selected from among 69 student teams representing 25 states and Puerto Rico participating in the challenge.

Rose Rocketry student leaders admit they were overwhelmed by complexities involving technical aspects during last year’s inaugural effort, with the team failing to meet the competition’s launch requirements due to parachute failure.

“Cohesion between team members has already improved compared to last year and with a preliminary design almost ready to be built and tested, we expect a successful year,” said the club president. , Sam Betts, third-year mechanical engineering student. “We needed people, subsystems and funding to succeed in a competition of this magnitude. We are well on our way to achieving these goals. »

Student recruitment brought in a team of 40 students from various academic disciplines in engineering and science. Executive positions cover every system in the project, and members of the Rose Tech Radio Club consult on important in-flight communications. Team management also made an important design decision to limit the length of the rocket to six feet.

“We made other tough design decisions early in the production process and are now focused on the prototyping and competition design stages. We have clear and manageable timelines between the launch challenge deadlines. NASA students,” Betts said. “It’s been a total team effort this year.”

The club president added: “I can’t explain how excited I am for this year’s competition. I have already seen our members’ interest in aeronautics and competition, and I enjoyed getting to know new people and their interests. We worked hard on the proposal (entry to the initial competition) and everything went much smoother than last year. I desperately want to make it to the launch part of the competition this year.

Each year, NASA updates the contest payload challenge to reflect the technologies needed for existing missions. This year, students must design a payload capable of autonomously receiving radio frequency commands and performing a series of tasks with an on-board camera. Teams must declare a target altitude for their rocket on final launch day, with the team closest to their prediction winning the Altitude Award. Additional rewards are given to deserving teams for vehicle design, experience design, and social media presence. Teams should conduct outreach programs to educate local communities.

“This competition has the potential to transform students into highly skilled professionals for the modern workplace,” said Fred Kepner, operations manager for Student Launch at Marshall, in a NASA press release. “Many former students are now working with NASA or our industrial partners across the country, some supporting the next chapter in space exploration, the Artemis program.”

———
Support the Rose Rocketry team by donating to: https://fundraise.givesmart.com/vf/RHITCompTeams/team/Rocketry