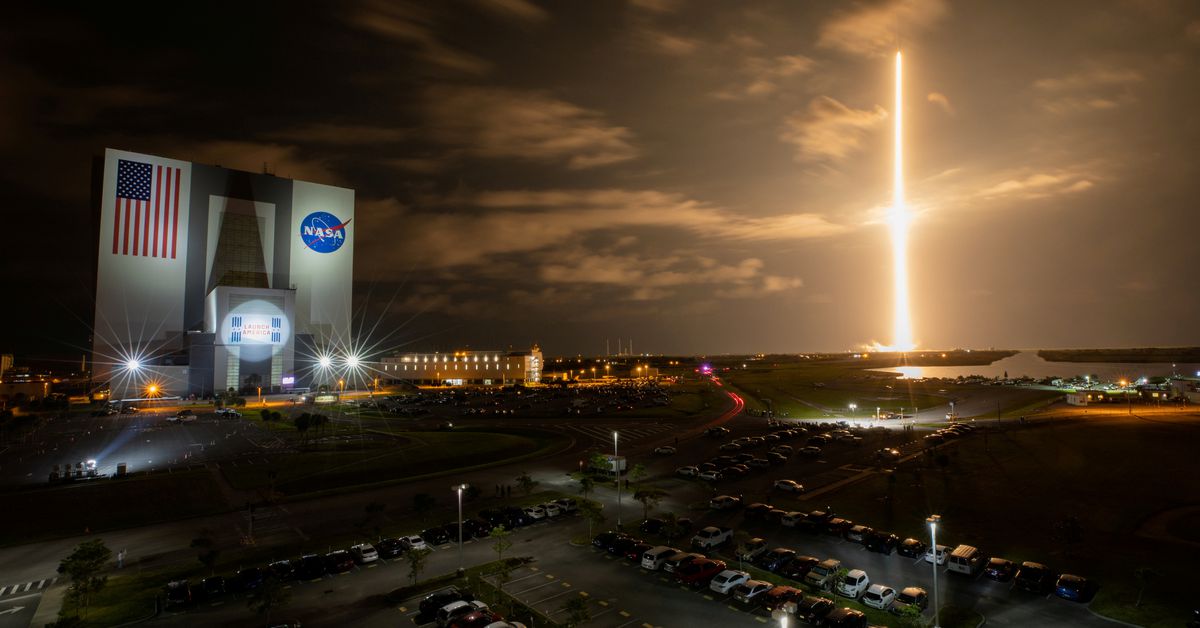 September 12 (Reuters) – Another billionaire entrepreneur set to travel to space this week, strapped inside the capsule of a SpaceX rocket as part of a team of astro-tourists ready to enter in history as the first fully civilian crew launched into Earth orbit.

Jared Isaacman, the U.S. founder and CEO of e-commerce company Shift4 Payments (FOUR.N), will lead three other spaceflight novices on a three-day trip from takeoff at Cape Canaveral, Fla., To landing in the Atlantic.

The crew’s vehicle, dubbed Resilience, was slated to take off from NASA’s Kennedy Space Center on top of one of Musk’s reusable Falcon 9 rockets, with a five-hour targeted launch window that opens at 8:00 p.m. EDT ( 0000 GMT) Wednesday.

Sunday’s forecast predicted a 70% chance of favorable weather conditions for the launch, organizers said, on a fully steered flight from the ground.

A successful flight could spawn a new era of commercial space tourism, with several companies vying for wealthy customers to pay a small fortune to experience the exhilaration of supersonic travel, weightlessness, and the visual spectacle of space.

Defining acceptable levels of consumer risk in the inherently dangerous business of rocket travel is also essential and raises a pressing question.

“Do you have to be both rich and brave to take these flights right now?” Sridhar Tayur, professor of operations management and new business models at Carnegie Mellon University in Pittsburgh, asked Friday in an interview with Reuters.

The Inspiration4 mission was designed by Isaacman primarily to raise awareness and support one of his favorite causes, St. Jude Children’s Research Hospital, a leading pediatric cancer center.

He personally pledged $ 100 million to the institute.

BEYOND THE BILLIONAIRE SPACE RACE

SpaceX is by far the most established player in the burgeoning constellation of commercial rocket companies, having already launched numerous cargo payloads and astronauts to the International Space Station for NASA.

But those two high-profile flights were on a suborbital scale, sending their citizen astronaut crews into space and back in minutes.

The SpaceX flight is designed to carry its four passengers where no fully civilian crew has gone before, in Earth orbit.

There, they will circle the globe every 90 minutes at over 17,000 mph (27,360 km / h), or about 22 times the speed of sound. The target altitude is 575 kilometers, or nearly 360 miles, beyond the orbits of the International Space Station or even the Hubble Space Telescope.

Like Blue Origin, the 20-story SpaceX launcher and crew capsule will take off vertically from a launch pad during a fully directed flight from the ground.

Branson’s suborbital rocket plane, on the other hand, had two highly skilled pilots at the controls as it carried its four rear passengers 81 km high.

The Inspiration4 crew will have no role to play in operating their spacecraft, despite some largely honorary titles, although two, Isaacman and geoscientist Sian Proctor, are licensed pilots.

Isaacman, who is qualified to fly commercial and military jets, took on the role of mission “commander”, while Proctor, 51, once a NASA astronaut candidate herself, was named as “pilot.” of the mission.

She was selected to join the team through an online competition organized by Shift4 Payments.

Sembroski won a seat in a raffle that drew 72,000 applicants and raised over $ 100 million in donations to St. Jude.

SpaceX and the crew have scheduled a full dress rehearsal of launch day activities in Cape Town on Sunday evening, which will be followed by a final “static” rocket engine firing test, organizers said.

The people in charge of Inspiration4 emphasize that the mission is more than a ride.

Once in orbit, the crew will perform medical experiments with “potential applications for human health on Earth and during future space flights,” the group said in media documents.

Appearing in a promotional clip for a Netflix (NFLX.O) documentary series about the mission, Arceneaux said much of his motivation was to give hope to his cancer patients.

â€œI’m going to show them what life can be like after cancer,â€ she said.