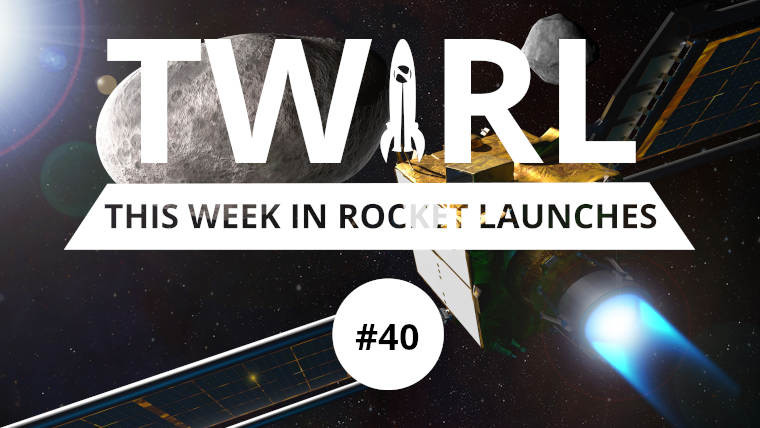 We have five launches taking place this week from various locations including China, America and Kazakhstan. The most interesting mission comes from NASA which will ask SpaceX to launch the Double Asteroid Redirection Test (DART) probe which will impact an asteroid called Dimorphos next year. NASA is touting the mission as its first planetary defense test mission, as a similar technique could prevent asteroids from hitting Earth in the future.

The first launch of the week takes place Monday at 10:44 p.m. UTC at the Jiuquan Satellite Launch Center in China. A CZ-2C Long March rocket topped with the YZ-1S upper stage will launch a payload. It’s unclear what the mission payload is, but we might find out at recap in TWIRL 41.

The second mission of the week is the launch of the DART probe which was mentioned at the top of the article. A SpaceX Falcon 9 rocket will transport the probe out of Earth’s gravity before heading towards asteroid 65803 Didymos. The asteroid is a binary asteroid, which means it is orbiting a satellite – this satellite is known as Dimorphos and will be the impact target of DART. As it stands, the impact is expected to take place on September 30, 2022, but variables are causing the timing to shift.

The DART mission does not carry any scientific payloads, just a camera called DRACO which will help target the Didymos system. An interesting aspect of this mission is the inclusion of the NEXT-C ion engine. Compared to other ion engines, the NEXT-C is described as having improved performance, thrust and fuel efficiency. While not the primary propulsion system on DART, NEXT-C will demonstrate its potential for use in other deep space missions. This mission will be launched at 6:20 UTC and will be available from that of NASA and SpaceX live broadcasts on their websites.

The third launch of the week also takes off on Wednesday, but this time at 13:06 UTC from the Baikonur Cosmodrome in Kazakhstan. This time, a Soyuz 2.1b rocket will launch a modified Progress spacecraft with the UM node module to the International Space Station. UM is the abbreviation for Uzlovoy Module and bears the designation Prichal. It will be added to the ISS and provide four ports for mounting additional modules and an additional docking port for cargo and crew spacecraft.

The third and final launch will take place at 4:00 p.m. UTC on Wednesday from the Xichang Satellite Launch Center. Once again secret, a Chinese Long March CZ-3B rocket will carry an unknown payload into orbit.

The fifth and final mission of the week comes from the Plesetsk Cosmodrome in Russia at 1:09 UTC. A Soyuz 2.1b with a Fregat-M top stage will launch the EKS 5, a component of Russia’s new Unified Missile Early Warning Network. The Edinaya Kosmicheskaya Sistema (EKS) system will be able to detect ballistic missiles launched from the ground or the sea as well as certain cruise missiles. The satellite will also be able to determine the flight path of the missiles and relay the data to ground stations for more precise tracking.

The first launch last week was on November 16 from French Guiana when a Vega rocket launched CERES 1, 2 and 3 for the French military. The satellites will be used for electromagnetic intelligence.

The second launch took place on November 18 from New Zealand. Rocket Lab launched an Electron rocket as part of the â€œLove At First Insightâ€ mission that put two BlackSky satellites into orbit.

Then we had a launch in the early hours (UTC) of November 20 from the Taiyuan Satellite Launch Center in China. A Long March 4-B rocket launched the Gaofen-11 03 Earth observation satellite. The satellite will perform various tasks to improve economic and social developments.

The final launch also took place today but a little later than the last mission at 6:16 UTC. Astra Space launched Rocket 3.3 from the Pacific Spaceport Complex in Alaska. The mission carried a test payload to measure the rocket launch environment for the US Space Force.