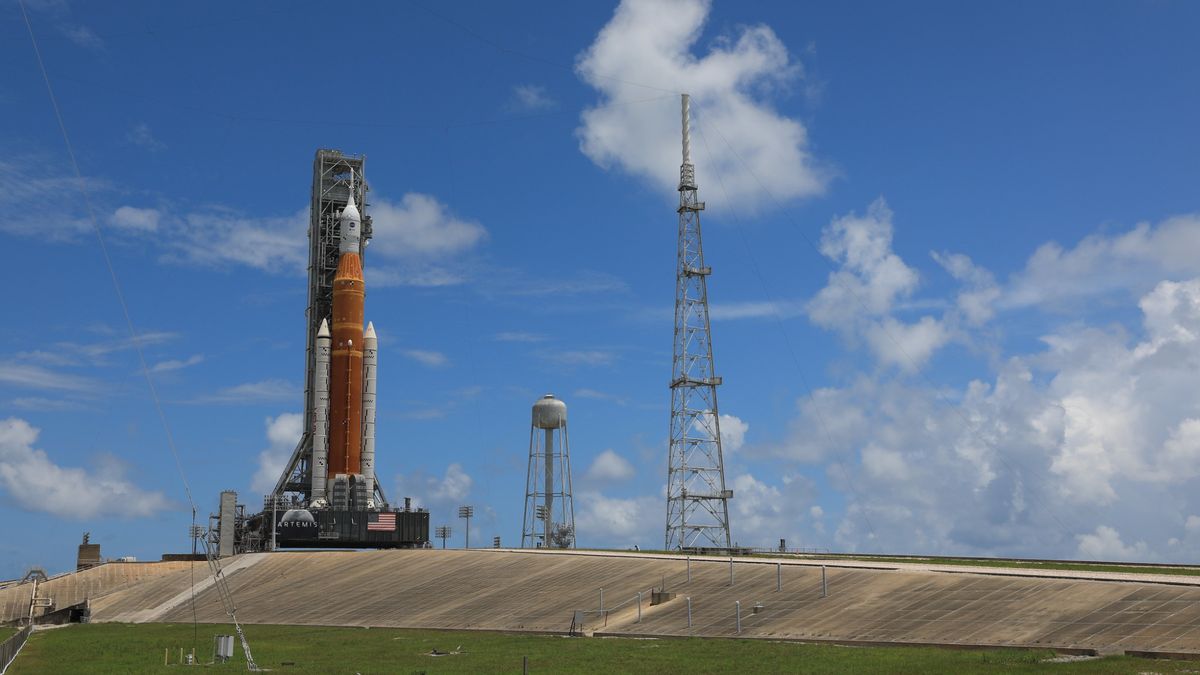 NASA’s Artemis 1 lunar mission is set to launch a new era of American lunar exploration this month. You can learn the science behind the flight (and watch its towering rocket heading for the launch pad) in a series of webcasts next week.

Artemis 1 is an uncrewed test flight of the massive Space Launch System (SLS) mega-rocket and its Orion spacecraft, which NASA will use for crewed flights to the moon later this decade.

The planned launch date for Artemis 1 is August 29, with September 2 and September 5 as backup days. The rocket will roll to its pedestal on Thursday (August 18), which you can watch online for free on this page, as well as via NASA’s website (opens in a new tab)NASA TV and the NASA app (opens in a new tab).

But just because there won’t be astronauts aboard Artemis 1 doesn’t mean NASA isn’t planning to gather a lot of lunar science during the flight. On three teleconferences next week — August 15, August 16, and August 17 to be exact — NASA will detail the myriad science payloads hitching a ride on Artemis for its 42-day mission around the moon. You will be able to listen to the teleconferences on this page for free, before the deployment of the SLS rocket. Here is a calendar of what awaits you.

On Monday, August 15, NASA will hold its first teleconference of the week at 5 p.m. EDT (2100 GMT) to highlight the lunar science payloads aboard Artemis 1.

“Ten shoebox-sized secondary payloads, called CubeSats, hitchhike to space on the Artemis I Space Launch System (SLS) rocket, and several other surveys fly inside of the Orion spacecraft during the flight test,” NASA officials wrote in an announcement. (opens in a new tab).

“Each of the payloads will perform science and technology experiments in deep space, expanding understanding of lunar science, technological developments and deep space radiation.”

Here’s what to expect at the briefing:

The next NASA briefing will be at 12 p.m. EDT (4 p.m. GMT) on Tuesday, August 16. During this briefing, agency officials will discuss the technology demonstration and solar system science payloads aboard the mission.

These payloads include the Orion space capsule’s crew life support systems (NASA has a new launch and entry spacesuit for astronauts on board), as well as the ArgoMoon and NEOScout cubesats.

ArgoMoon is designed to take autonomous images of the upper stage of the SLS rocket, called the Interim Cryogenic Propulsion Stage, and was built by Italian company Argotec with support from Agenzia Spaziale Italiana, the Italian space agency.

“The cubesat will use high-definition cameras and advanced imaging software to record images of ICPS, and later the Earth and Moon, for historical documentation, [to] provide mission data on the deployment of other cubesats, and [to] test the optical communication capabilities between the cubesat and Earth,” NASA said in a statement. (opens in a new tab).

NEOScout is a daring cubesat designed to visit an asteroid called 2020 GE, which is about the size of a school bus. The mission is overseen by NASA’s Jet Propulsion Laboratory in California.

“Launching with the Artemis I uncrewed test flight, NASA’s shoebox-sized Near-Earth Asteroid Scout will chase what will become the smallest asteroid ever visited by spacecraft. deploying a solar sail to harness solar radiation for propulsion, making it the agency’s first deep-space mission of its kind,” NASA wrote in a description. (opens in a new tab).

Here’s who you’ll hear at the press conference:

NASA’s final press conference call of the week will take place at 12 p.m. EDT (4 p.m. GMT) on Wednesday, August 17. It will center on the radiation science that NASA hopes to derive from the Artemis 1 mission.

Artemis 1 is the first mission in NASA’s Artemis program, which aims to return astronauts to the Moon, build a sustainable lunar base, and then target Mars. Astronauts on these long lunar missions will be subjected to a much harsher radiation environment than those in low Earth orbit on the International Space Station (ISS). To understand the risks of space radiation, as well as to develop countermeasures, Artemis 1 carries several payloads for scientists.

Among them is the StemRad radiation vest, which will be worn by one of the two dummy torsos of the Orion spacecraft to measure the radiation environment. The mission will also include plant experiments and BioSentinel, a cubesat that will grow yeast in the deep space radiation environment over the course of a year.

Additional webcast! In addition to the Artemis 1 briefing, NASA will also webcast live views of a Russian spacewalk to the ISS on Wednesday. This webcast begins at 9 a.m. EDT (1300 GMT) and will follow Russian cosmonauts Oleg Artemyev and Denis Matveev as they work outside the Russian segment of the station.

The last Artemis 1 webcast event of the week will take place on Thursday, August 18, when NASA aims to begin deploying the Space Launch System mega-rocket and the mission’s Orion spacecraft on Launch Pad 39B at Kennedy Space Center on the coast. from Florida. The rollout could begin as early as 6:00 p.m. EDT (22:00 GMT).

Deployment is expected to take several hours as the SLS rocket moves to the pad atop its mobile launch pad. NASA’s Apollo-era tracked carrier vehicle will carry the 322-foot-tall (98-meter) rocket to its pad.

Additional webcast! The deployment of Artemis 1 is not the only space event on August 18. A SpaceX Dragon freighter will also leave the ISS to begin its journey back to Earth on the same day.

SpaceX’s Dragon is scheduled to return to Earth later today on August 18 to bring approximately 4,000 pounds (1,815 kg) of science supplies and experiments to Earth. Splashdown is targeted off the coast of Florida so the capsule can be recovered and returned to Kennedy Space Center, where it launched in July.

Next week’s webcasts will set the stage for NASA’s launch of Artemis 1, which will likely have its own series of pre-flight briefings and webcasts. Space.com will share this briefing program as it becomes available.